Moving my family to the other side of the world was not something I ever thought I’d do. But once the idea took seed, the question became “why not?” and later “how?”. Yes, there were a tonne of reasons not to move (family, friends, schools, a house we’d just finished renovating, businesses and some reputation in our industry), but there were also lots of reasons for moving (half of which we wouldn’t know until we did it!). I’m no-one special, I just made a decision and set new goals around making it happen. 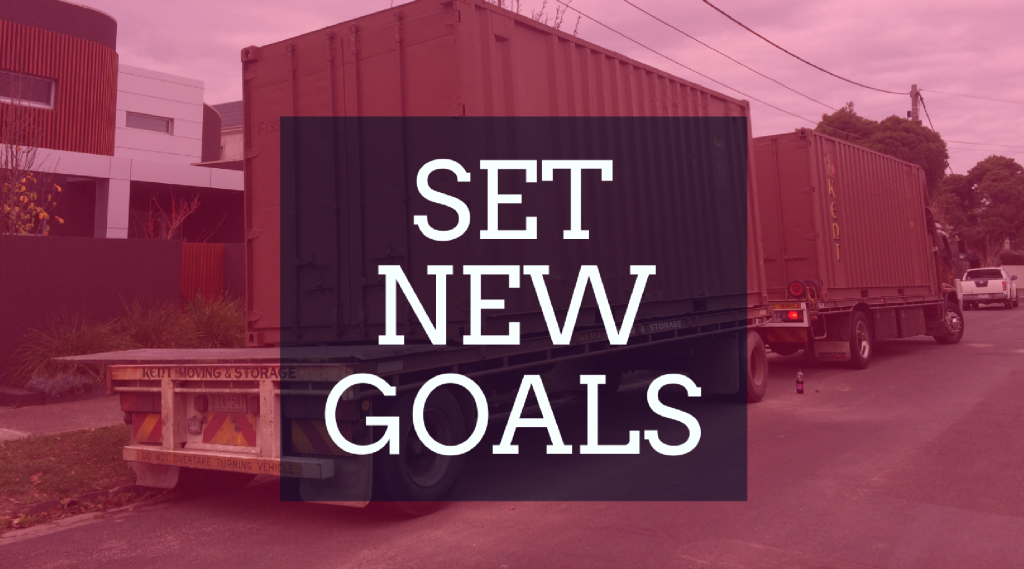 Yes, this picture shows all our worldly goods being packed into containers for storage!

As it turns out, almost all of the best things I’ve done in life have come about as a result of big-picture thinking. Asking myself questions and imagining taking a different path from the one I’m on.

[tweetshare tweet=”As it turns out, almost all of the best things I’ve done in life have come about as a result of big-picture thinking. Asking myself questions and imagining taking a different path from the one I’m on.” username=”FiAdler”]

With the end of the year drawing nigh, it’s a time when many of us start thinking about goal setting. New Year’s is coming and all that… But before getting your goal-setting journal out, I want to encourage you to think bigger this time. To think different, and to challenge the status quo.

Instead of just lamenting about your lack lustre sales, your career that’s ok but not great, a couple of extra kilograms, or a house that could be a bit nicer, how about you really shake things up a bit? Instead of incremental improvements, let’s rethink what we should be aiming for.

[tweetshareinline tweet=”Have you noticed that most of the outrageously successful people are also a little bit crazy? That’s no coincidence. ” username=”FiAdler”] Most of the time, success follows an unreasonable amount of effort and focus that those people put on that one thing in their lives.

These people do not have ‘balanced lives’. There are areas of their lives that they neglect or they suck at. Their lives would not be described as ‘normal’ or ‘average’. They do some things lots of us could hardly imagine ourselves doing. But why not? Why are we so attached to the status quo? To fitting in? To being ‘average’ or maybe, if we’re a striver, ‘just above average’?

I don’t think we need to have the same lives as each other. I also think that the more things we try, the more likely we are to hit on something that will dramatically impact our life satisfaction.

Expand the Realms of Possibility

So before you jump into goal-setting, here are some questions to ponder as you consider the next chapter of your life…
(Promise me you won’t dismiss the questions just because they sound outrageous. Remember, being a bit ‘crazy’ might be a hint you’re on the right track. Spend a few minutes on each question and allow your mind to at least consider the possibility.)

Chances are, that to do any of these things, you’d have to let some people down. Or surprise some people by acting out of character. Or perhaps challenge yourself to learn new skills and try new things. Almost definitely, you’d need to take some risks.

But that doesn’t mean they’re not things worth doing. Like anything, there is a cost. But the important thing is to weigh up the cost of not doing something, versus the possibility of achieving that thing that might just change everything for the better 🙂

Set new goals this time. Ones that really get you excited.

Where to focus next? Find the Bottleneck!

How to Stop Procrastinating and Take Action

How to Reset Yourself