Confused about how to prioritize work and tasks? You’re not the only one! The word “prioritize” itself is a strange one because it has two similar but different meanings. The first is to put things in an order. So in this sense, prioritize synonyms include; rank, order, list, and arrange. For example, in business we often need to “prioritize our long list of tasks”. The other meaning is also a verb but the sense is to give top importance to something. So, the second type of prioritize synonyms would be; focus on, concentrate on, spotlight, rank first. You could say things like “we will prioritize getting customer feedback” or “I will prioritize this report”.

In fact, as explained in the popular book, Essentialism, historically, the word “priority” was never a verb and had a different meaning from the way we use it today. The plural version “priorities” didn’t exist as “priority” was only ever used to describe the very first, or prior thing. Somewhere along the line we decided that we could have multiple “first” things and the verb “prioritize” is thought to have made its debut only in the late 1960’s.

No wonder we don’t know how to prioritize!

So how do you prioritize when everything is important? 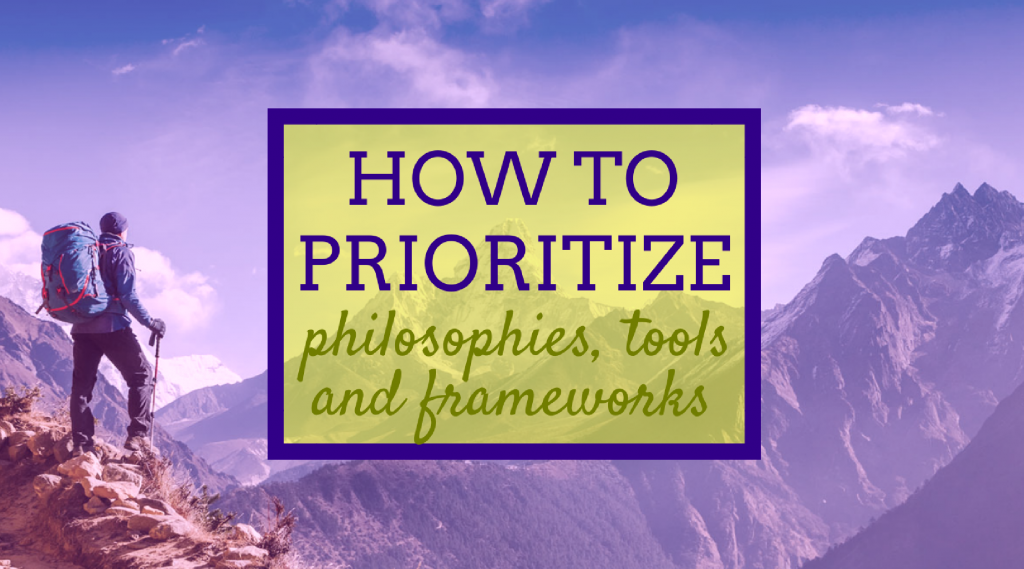 Your ability to Prioritize will determine your future

Whether or not prioritize is a word, one thing’s for sure – the way you prioritize, or neglect to prioritize, will have a huge impact on your future. This has always been an important skill, but never before have we had the sheer number of choices and different directions to take our projects (and in fact, our lives).

Think of the truly impactful, amazing people you know. Chances are, they have an uncanny ability to prioritize and focus. They decide what’s important, and then they do the important things. If you’re wondering how to be more productive, it’s wise to start with prioritization.

Warren Buffett has a two-list prioritization system for determining which work deserves his attention. As the story goes, he had a conversation with a long-term employee and asked him to write a list of the top 25 career goals he wanted to achieve in the next five years. After doing this, Buffett then asked him to narrow his list down to just five goals. Although there was some resistance, Buffett insisted it be no more than five.

When his pilot returned with his five goals, Warren asked about the goals that were not on the top 5 list. The employee responded, “Well, the top 5 are my primary focus, but the other 20 come in a close second. They are still important so I’ll work on those intermittently as I see fit. They are not as urgent, but I still plan to give them a dedicated effort.”

To which Buffett replied, “No. You’ve got it wrong. Everything you didn’t circle just became your Avoid-At-All-Cost list. No matter what, these things get no attention from you until you’ve succeeded with your top 5.”

In large part, Buffet’s system comes down to “avoiding at all costs” those things that might seem useful and worthy, but yet are not the top priorities. 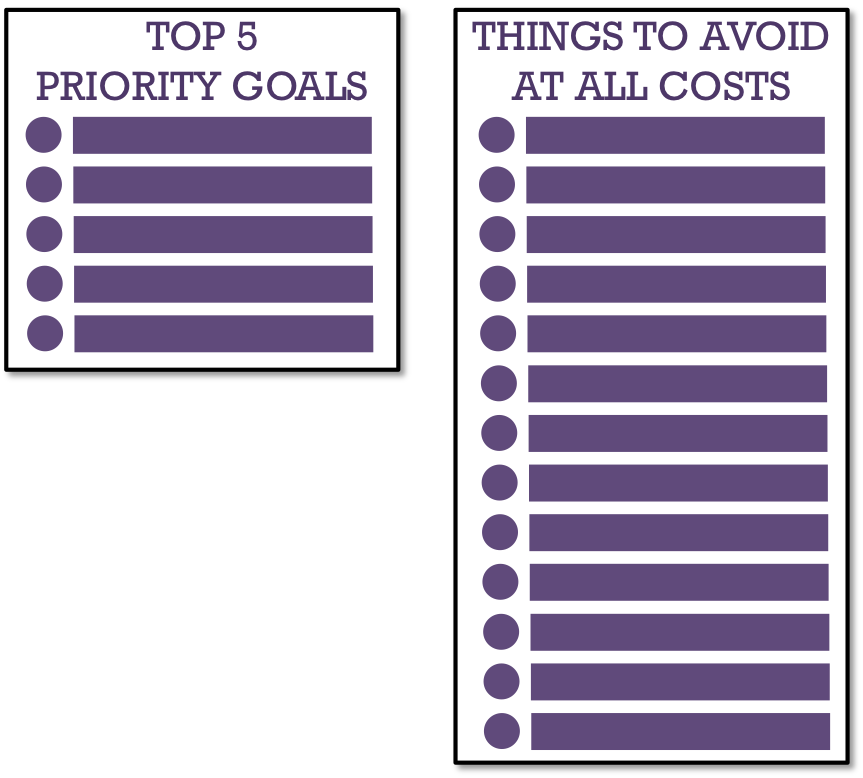 In 1918, Charles Schwab was one of the wealthiest and most powerful businessmen in the United States. Wanting to increase the productivity of his team, he engaged a renowned business consultant, Ivy Lee, for advice. Lee then met with each of the executives and gave them the following instructions;

Essentially, Lee’s advice was to create a daily action list with items force ranked and a mandate to work on the top priority until it is finished, before moving onto the next priority. With a daily evaluation, this makes sure that what is really important gets done. 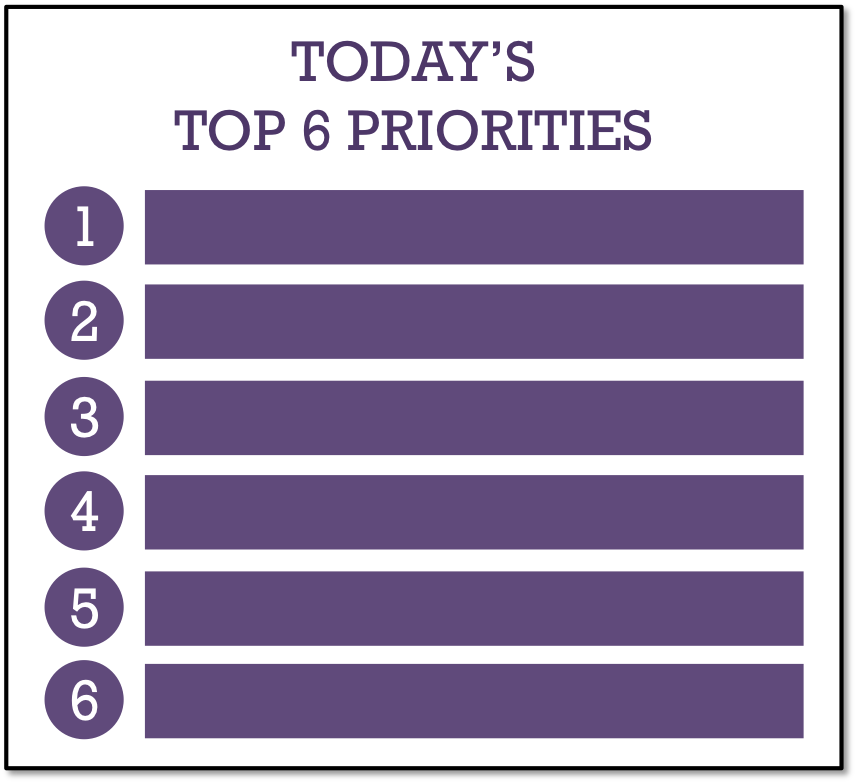 Use a diary to Prioritize

Mark Ford is a self-made millionaire, marketer, business advisor, and author of more than 10 books. He credits a deceptively simple routine for his productivity. Like Ivy Lee, he recommends deciding on your top priorities each day, but that’s where his technique differs. He then says he starts work on the most important priority. After some defined time, he takes a break, then works on the second most important priority. After another break for lunch, he uses the afternoons to attend to less important work and anything he’s received from other people.

This technique ensures that the top priorities are attended to but still leaves room in the day for other inputs and unplanned tasks. 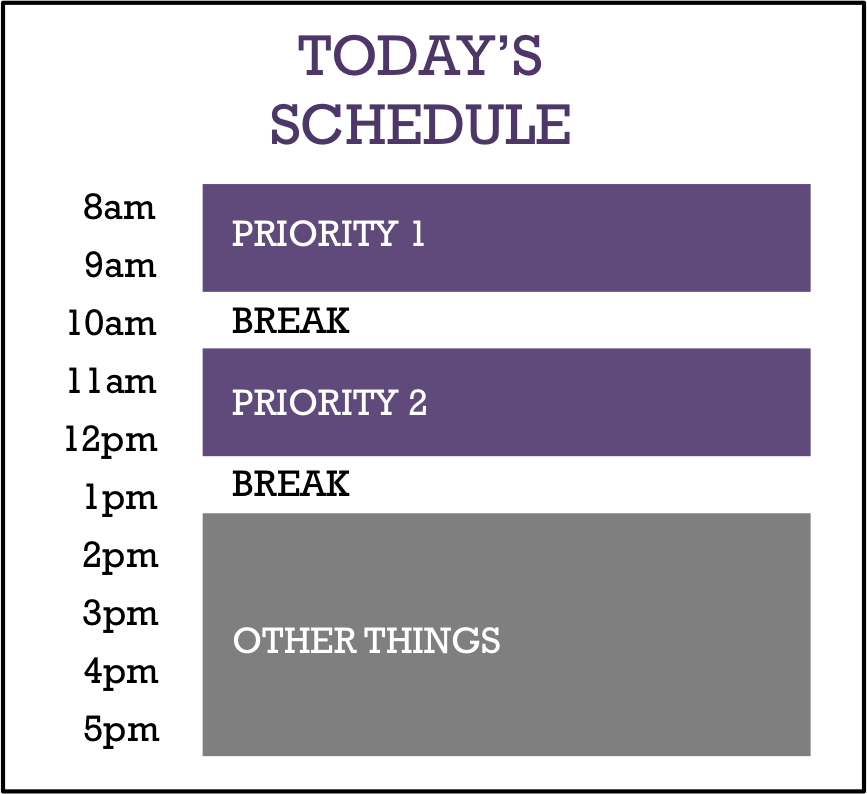 Prioritize with the Importance-Urgence Prioritization Matrix

You’ve probably seen the prioritization matrix that plots urgency against importance. I first came across this in Stephen Covey’s 7 Habits of Highly Effective People, but have since found out that it originates from Dwight Eisenhower – the president of the USA from 1953-1961.

The idea here is that you assign your various options (tasks, projects, to-do’s) into one of the four quadrants. Then you act on them as follows;

This framework can be useful – especially for getting clarity on what’s important versus what’s urgent. However, if we continuously followed this advice, we might never get around to those important but non-urgent tasks – which are often where the long-term benefits lie. 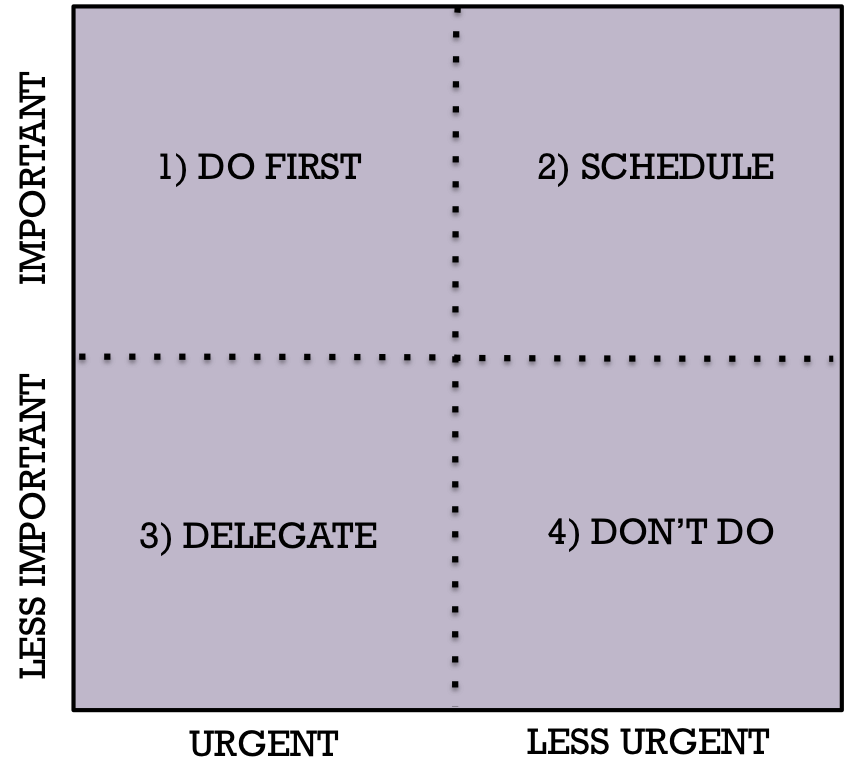 Prioritize with the Value-Difficulty Prioritization Matrix

This is also known as the Impact-Effort Prioritization Matrix, but it’s origins are unclear. I’ve used it many times as a strategy consultant and also for evaluating various different initiatives to pursue in the small businesses I’ve run.

You can either use this matrix with real numbers and weightings to drive your placements (eg with cost estimates, time assessments, etc), or just make a judgement call using your gut. I’ve found that because you’re comparing options, you only need to understand the relative differences so a judgement call is usually strong enough. (You usually have a good feeling for which option will cost more or is likely to bring in more revenue, and if you don’t it’s unlikely that putting numbers in a spreadsheet will help!)

Once your options are plotted on this matrix, simply start from the top-right quadrant (high impact and low effort) and move down towards the bottom-left (see diagram). 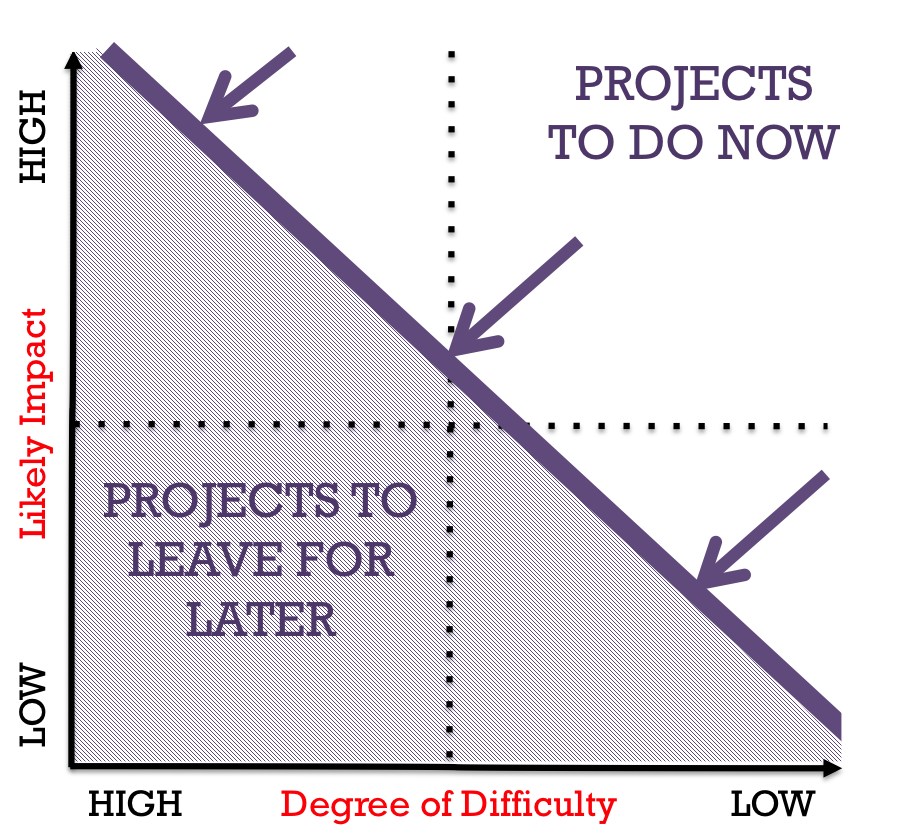 Prioritize by visualizing the Domino Effect

What is the ONE thing I can accomplish [from this list], so that if I accomplish it, everything else will become easier or unnecessary?

In other words, what could you focus on that will have the greatest knock-on effect towards achieving your goal?

By definition, a decision to focus on one thing also implies a decision to cut out other options (eg consolidating product lines). This is not a shortcoming but in fact a the strength of this tool. As we’ve seen with other frameworks, deciding what not to do is just as important as deciding what to do. 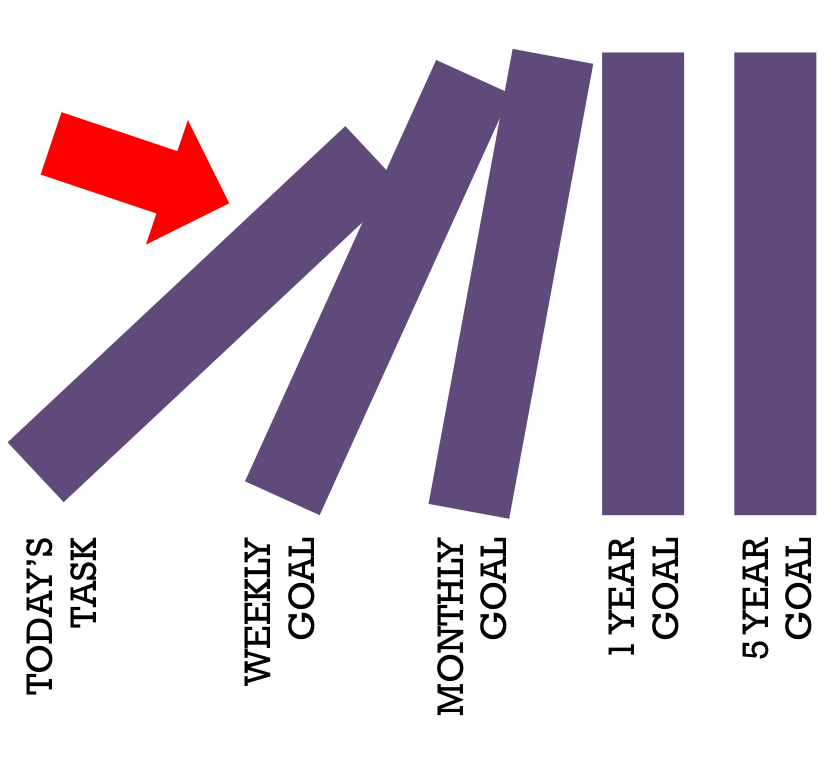 Prioritize by assessing the Bottleneck

A similar tool is the image of the bottleneck. What one area is causing a problem that affects everything else? What one thing is the limiting factor?

For example, you could look at a customer acquisition funnel. If the bottleneck, or point of greatest leakage, is onboarding customers, there’s little point focusing on getting more leads. Likewise in a factory, if there is one process that is slower than the rest, that is the limiting factor and is where you should focus your attention. So, when thinking about where to focus, find the bottleneck. 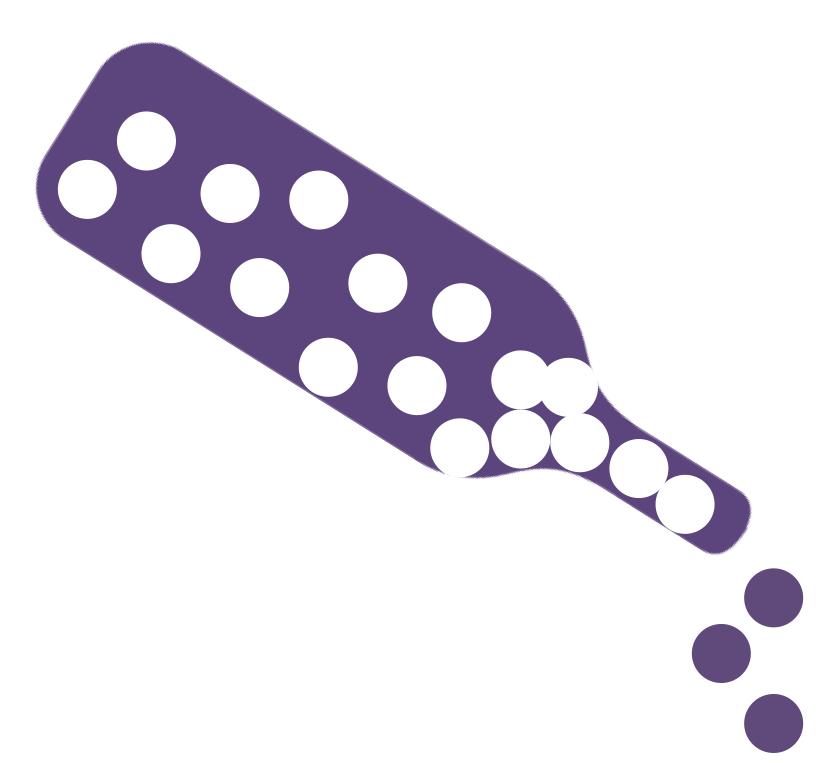 Finally, if your prioritization assessment involves significant risks, the risk prioritization matrix can be useful. On this matrix, you simply plot the severity of the hypothetical risk (should it occur), against the likelihood of that event occurring.

Similar to the impact-difficulty matrix, items should be prioritized with those flagged as having the highest combination of these factors to be given top focus and then moving down the matrix as you mitigate those risks. 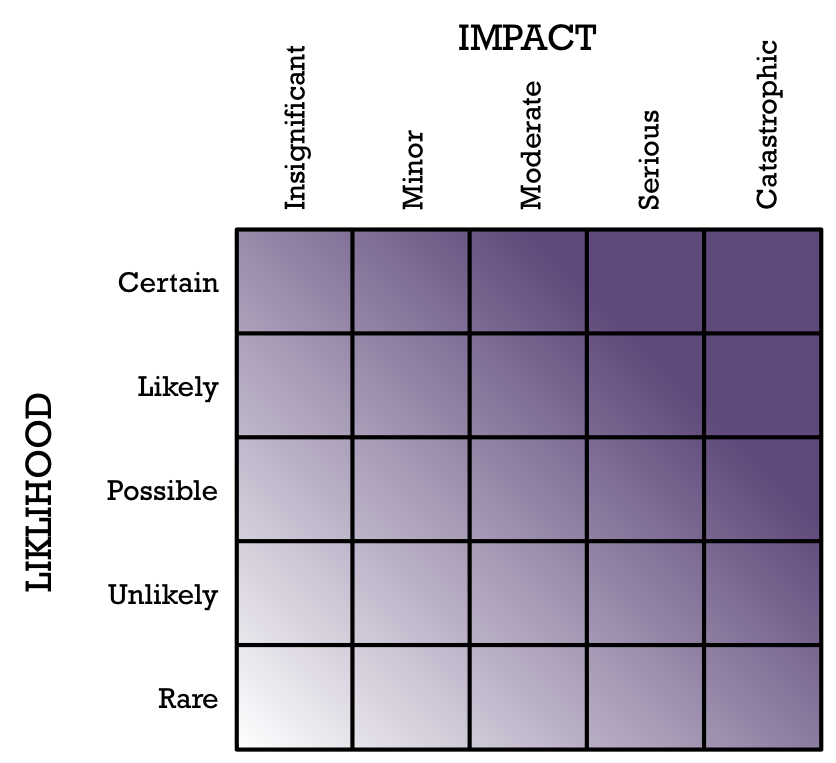 There’s no perfect way to prioritize but those are the main tools and ideas. Which prioritization framework you choose will depend on the nature of what you’re prioritizing. Back to our definitions, my favorite prioritize synonym? Focus. Decide where you’ll focus and therefore what you’re not focusing on. Be deliberate about deciding what to focus on and you’ll find yourself making meaningful progress.

Feel like you’re floundering and not making progress? Here’s why it’s not working

Just 3 Things a Day… seriously this changes everything

Why you need a Daily Business Plan Review

How to Work Less AND Feel More Accomplished: Advice from the Pro’s