Do you find yourself constantly questioning the direction of your business, putting off decisions, or doing things that seem productive – like searching for a better business plan format or diving into learning about something that could help your business? It could be that you’re stuck in the Thinking Trap – but maybe you’ve got other procrastination vices. Either way, we’re all susceptible to procrastination (to differing extents) but the successful people succeed because they have tools to help them stop procrastinating and take action.

I was once at a seminar where the business coach asked a crowd of business owners which they thought was more important – planning or action. I was stunned that more than half of the attendees regarded planning as more important. (Carissa from this coaching business soon set them straight!) Without a good plan, it’s true that you might not be optimising your business, but without action, there is literally nothing! So develop a mindset where you have a bias for ACTION. Action is what gets things done. Sure you might make mistakes but you’ll still make far more progress than those waiting for everything to be perfect before taking action!

So how do we kick ourselves into action? What are the habits that successful people have to stop procrastinating and take action? 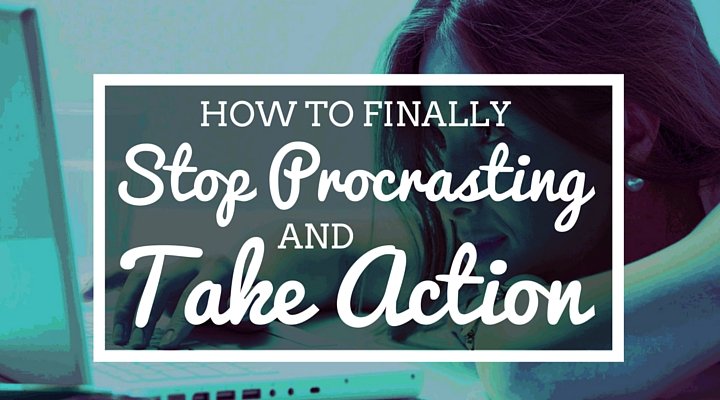 While I can’t speak for everyone, these tips have worked for me and several entrepreneurs I know…

Having a vague sense that we want to be more productive is not really something that’s going to spur us into action. The first step is to have a specific goal or outcome that we’re trying to achieve. You can have more than one, but don’t try to do everything at once.

Often we’re not taking action because we don’t really know what we should be doing next. Take a few moments now to list out the exact next steps you need to do to move this project forward. You don’t need define all the steps – just the next few to get you started.

Yes, put it on the calendar and stick to it. Even if it’s something as small as making a phone call, if it’s something you’ve been avoiding, put it on the calendar. For a big task, you might need to block out several time periods to work on it. Whatever you do, when that time rolls around, make sure you don’t allow yourself to do anything else but work on this project.

…open up the program/s you need to work on, close everything else and sit there. “Bum in chair” is one of the best productivity methods I know!

Use the pomodoro technique or some variation of it to give yourself a short, but concentrated amount of time to focus on your one task. (You don’t have to use 20 minutes, choose a shorter time if you’re really struggling or longer if you’re confident in your abilities to stay focussed.) You can use the timer on your phone or something like e.ggtimer.com to keep you accountable.

6) Set yourself up to be on a roll

Congratulations! You’ve made a great start and you may even be tempted to keep going while you have momentum. And you should – but not until your momentum runs out! Instead, try to leave your project at a point that will make it easy to come back to tomorrow. Don’t wait until you’re stuck on a tricky part as that will just make it all the more difficult to get started tomorrow. Writer Ernest Hemingway was famous for stopping his writing mid-sentence and explained it as such;

“You write until you come to a place where you still have your juice and know what will happen next and you stop and try to live through until the next day when you hit it again.”

7) Use your procrastination tendencies to your advantage

Like it or not, it’s natural that we avoid the hardest task in favour of something else that might be easier. So take advantage of this tendency and create an even bigger, scarier project so that you can get the easier project done! It sounds counterintuitive but it works! Choose something that you really want to do, but have currently put in the “later”, “too hard” or “too scary” list.

Do you have any tips or tricks to overcome procrastination? I’ll give anything that can help us stop procrastinating and take action a go, so let us know!

Where to focus next? Find the Bottleneck!

10 Tips for Running a Business around a Family

Could you get more done in less time?

7 Things to Stop Doing in Business