Exactly 10 years ago today, after about 2 months of trekking, climbing, acclimatising and waiting, and years of training, I managed to stand on the summit of Mount Everest. In many ways it feels like it was another person as I now lead a much tamer life, but it was an experience I’ll never forget. There were many learnings from climbing Everest, but one in particular stands out above the rest.

Standing at the top looking down onto at the mountains that had towered above me for the previous weeks, seeing the curvature of the earth, talking to my husband and basecamp support team on the radio, I felt utterly amazed that I had reached this point. 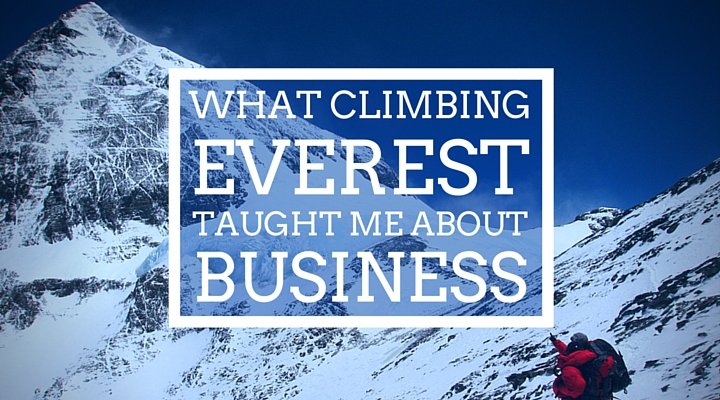 Although I had completed many climbs previously, this one pushed me in different ways and taught me some important lessons that I continue to use, including one I believe everyone can benefit from…

Dealing with Overwhelm and Doubt

Heading off into the blackness of night for my summit push, I remember feeling utterly overwhelmed at the enormity of the task ahead of me. After climbing for several hours in temperatures around -35C, it seemed that I had barely made any progress and I actually felt pretty stupid for taking on a challenge that right now seemed so clearly out of my league. It was hard to remember why I was there (what was I thinking??) and rationalise going further away from civilisation, warmth and safety towards the unknown.

Prior to the expedition, I had obviously read a lot about other expeditions and in particular, what went wrong and the different choices that might have prevented those disasters (if you haven’t come across it, Into Thin Air is a fantastic read). One of the decisions I made prior to climbing was that on summit day, I would turn around and start heading down by midday – regardless of where I was on the mountain. Many of the previous accidents seemed to occur when people pushed on for too long, a phenomenon known as “summit fever”, and then didn’t leave enough time or energy to get themselves safely down. So setting a “turn-around time” seemed like a logical decision to make.

Forget the Goal, Focus on the Effort

Well, in the thick of the climb, it now appeared to me that I had absolutely no chance of making it to the top. The lack of oxygen was taking it’s toll and I felt like I was moving way too slowly to even get close to the summit. But, as thoughts of pulling out and returning to the relative safety of Camp 4 came to mind, I managed to reframe my thinking.

I remembered my turn-around time and thought “well I don’t want to pull out until I’m absolutely sure I’ve given it a good shot”. I then effectively changed the way I used that time and told myself I would keep going until 12:00pm*.

Instead of overthinking and talking myself out of it, I found a way to keep myself taking action. Make the decision once and then keep taking the next step. Just focus on getting to the next crest, the next rope change, 5 more steps. Trust that you’re going the right direction and don’t stop to re-evaluate until the cut-off time.

And amazingly it worked. Although the expedition was not without issue, I stood on the summit at 7:50am and my husband and I later returned safely to basecamp. If you’re interested, we wrote a lot more detail about the trip here.

I had hoped that climbing Everest would give me a feeling of invincibility and utmost confidence that I would carry throughout life, but unfortunately I still have my share of self-doubt and fear. Instead, what it did teach me is that perseverance is everything. In almost all cases, perseverance is more important that skill, knowledge, networks and anything else that people might think they’re missing.

Clearly, there are times when it makes sense to pull out or change directions, but most of us have a tendency to do that way too early. Before you decide that something is impossible, make sure you’ve given your all before you quit.

So, if you’re struggling through something right now, keep going and know that if it were easy, everyone would be doing it.

*Obviously in the case of climbing, I would also ensure that my health and the health of others was not jeopardised. But I didn’t want to stop early just because I was feeling too tired.

How a Mastermind Group can transform your business (and you)

The Thinking Trap that Can Derail Your Goals

How to Stop Hating Your Business